When To Divide Hostas

There are two ideal times to divide your hosta: Spring and Fall.

The reasons are simple:

Inevitably, when you divide plants, you are losing some of the root system.

Hosta Division In The Spring

Spring division is about a four week window. Once the hosta eyes are popping up and before they have begun to unfurl is the window of opportunity to make your move.

Hosta Division In The Fall
Fall division is also an approximately four week window. In the northern climates this is going to be the month of September and, as you go south, that window for dividing hostas moves later into October. Cool moist weather is what you want. Make your decision based on the long range weather forecasts.

What You Need To Know
Generally, lifting and dividing hostas is setting them back several years in maturity. How far you set them back depends on how much root system is lost in the process. So, the question that you should be asking yourself before you proceed to divide your hostas is this: How many plants do you need and how far back in maturity are you willing to set them?

Why Are You Dividing Your Hostas?
Why do you divide hosta? I bring this up because I get the sense from some customers that they divide them too often.

Hosta Plants Only Improve With Age When They Are In The Right Location.

Some of the giant or jumbo hosta cultivars do not reach maturity for five years and they continue to improve in appearance as the overall clump expands. Hostas may reach a space limit and slow down in growth, but they rarely decline from space constriction. If they are in decline, it is more likely a poor site for that cultivar. They should be relocated to a more suitable location.

Adding To Your Garden Design 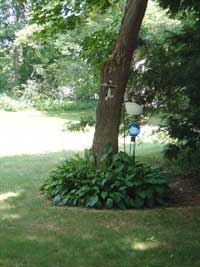 If you want more plants of a particular hosta cultivar to meet your garden design needs, there are several ways to do this.

Sharing Your Hosta With A Friend
If you are looking to give a friend a piece of your favorite hosta plant, you can often times cut off one of the outermost eyes without disturbing the primary clump.

How To Divide Hostas

How To Approach Dividing Hostas
Assuming that you have lifted a fairly substantial clump of, say, 30 eyes, you can approach it in several ways. 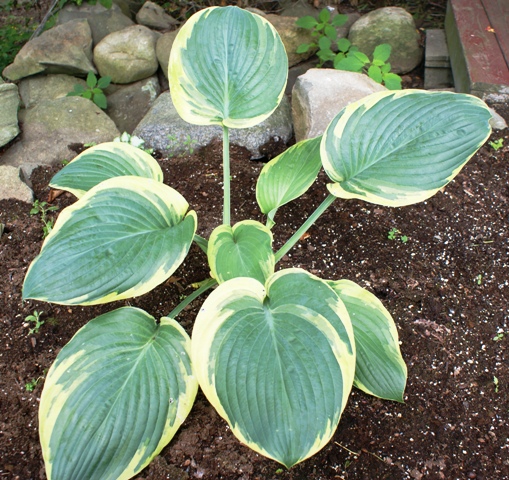 So, do you cut a clump of 30 eyes into 3 pieces or 30? To each their own according to their needs. If you are cutting hosta into individual eyes, I use old kitchen knives. If you are halving or quartering, I use a heavy straight spade.

Planting Your Divisions
When you are resetting your hosta plant divisions, they should be the same depth that they were prior to division. This is the ideal time to enrich your soil with ample amounts of compost - and don't forget to soak them after planting. This will help to eliminate air pockets as well as insure that the now reduced root system is in contact with moisture.